10 WAYS TO FLIP A KID AND TURN THEIR DAY AROUND

Teaching and Reaching Every Child 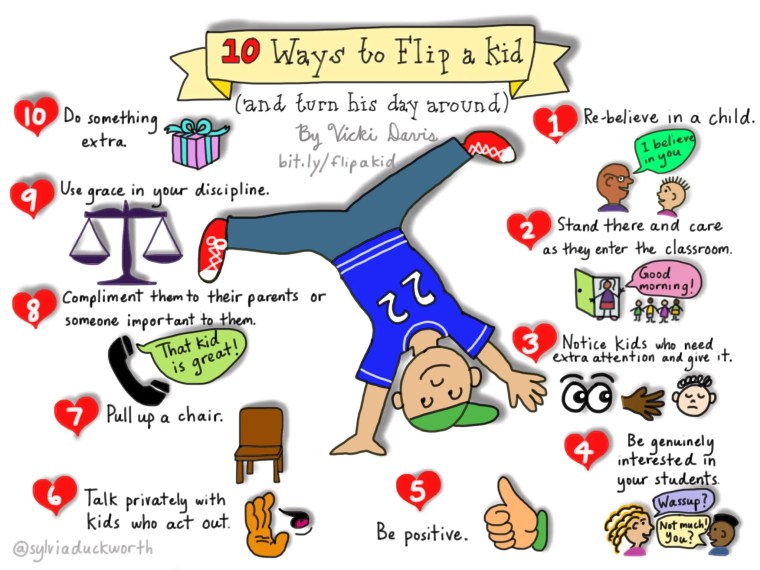 n A Story of a Young Life Turned Around by Great Teachers, Kevin Honeycutt shared, “I believe you can flip a kid on any given day in one hour.” I’ve been thinking. Can you?
Well, when something horrific happens: death in the family or other trauma — maybe not. But on most days with most kids, I think this is true. I had an upset child just yesterday. We had a private talk as she was coming into the classroom (straggling behind everyone else). And yes, she was flipped. My words and our interaction FLIPPED HER and changed her day. When I saw that happen, I realized that it is true. We can flip kids (and perhaps each other) if we pay attention and notice.
Here are some ways you can flip a kid. Please share yours in the comments. Let’s get this kid flipping conversation going!

I’ve been pondering, “how do you flip a kid, like you flip a house?” Reflecting over fourteen years, here’s how I’ve seen it done.

Kevin Honeycutt talks about rebelieving on the show. Give the child another chance. Decide you’re going to rebelieve in them and show it with your actions. It can be hard, but it is necessary. (Sometimes we need to re-believe in colleagues too.) 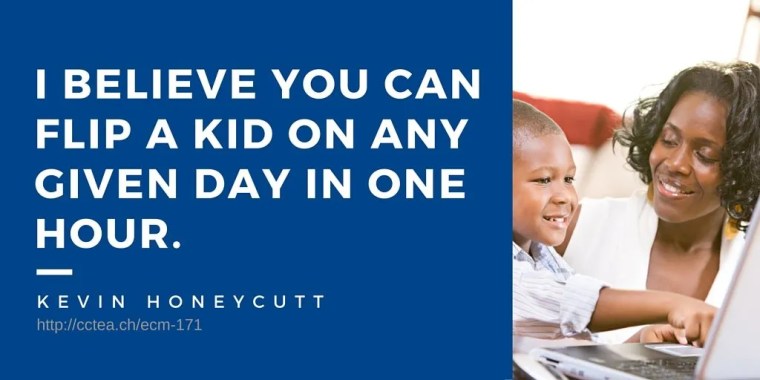 2. Stand there and care as they enter the classroom

Stand at the door, look them in the eye and call them by name as the day begins. If you look at their eyes, you can tell if they’ve slept. You can see stress. You can figure out all kinds of things. Call them by name. Ask them how their weekend was or if they’re doing ok.

3. Notice kids who need extra attention and give it.

When you notice kids who are having a bad day (as they enter your room), ask them how they are. Connect with them on a personal level. Talk to them.

Know what the student likes, ask them about their hobby or interest. If you can know about these ahead of time (see the 2 activities below), then you’re ready. Here are two classroom activities to uncover their interests:
Classroom activity 1. Adapted from Dave Burgess.
Step 1: Set the Stage. I call my Computer Lab the “Wonder Lab.” I talk to students about how this classroom is filled with wonder. But the most wonder-FULL thing is them. They are full of wonder. Talents they haven’t discovered yet. Strengths they don’t even know are there. So, I have play dough under these pirate bandanas (hat tip Teach Like a Pirate – oh yeah) and ask the students to uncover them.
Step 2: Model their Wonder. I ask them to model something out of the play dough that is one of their wonderful things. I play “What a Wonderful World” and they make their wonderful item. They take pictures and upload them to our private site. (They are also learning how to take pictures and upload them.)
Step 3: Share their Wonder-fullness with Parents. I take pictures with their face in the picture. They explain why this is something wonderfull about them. I share these pics with parents on Bloomz, giving them a quick reason to go ahead and join our parent-teacher communication system. Plus, the first pic parents see is of their child smiling in my classroom.
Classroom activity 2.
Great teachers unleash learning that feeds off student curiosity. Students write down “three things I wonder about in technology” on an index card. Now, as the teacher, I customize the classroom based upon their curiosities. It makes for a more engaging classroom.

If someone wrote down everything you say in a class period, would it be positive, negative, or neutral. Positive people promote growth and change.
Learn how to give compliments. “High five.” “Fist pump.” “Knuckle punch.” “Oh yeah!” Try one of the growth mindset statements I’ve shared.
Awesome teachers celebrate wins. When I’m 100, I pray to have lots of laugh lines and no frowny ones. How about you? Are you positive?

6. Talk privately with kids who act out.

When the student seems to be having a difficult time often, they’ll act out. Talk privately and ask how they are doing and if something is wrong. Don’t give kids who are acting out an audience. After taking a child aside, I often like to say,

“This is not like you. Today is not who you are. What is happening that is causing you to act this way?”

I learned this early on in my teaching career. A normally docile student suddenly lashed out at me and said something awful. At first, I thought I should send her to the principal. Instead, I took her outside my door and said five words,

“What on earth was that?”

She burst into tears. Her parents had told her they were getting a divorce. She hadn’t told anyone. Her profanity-laden outburst was a cry for help. There’s no excuse for profanity, but sometimes, you have to be the adult and know that they are still  young. Sometimes they just want your attention.
If you respond poorly to acting out, you can permanently destroy a relationship with a child. You can also lose the respect of the entire class. Remove the class or remove the student. Either way — get rid of the audience and handle this privately. Because when you have a confrontation with a student in front of the class isn’t isn’t just you and them but a powerful third party called peers who will make them act differently than if it were just a one on one chat.
When you finish having the discussion, always make sure you address the inappropriate behavior. I typically say something like:

“Now, if you look me in the eye and I know that we have an understanding that isn’t going to happen again, we can both move on.”

We talk about the behavior. Every single time, the child has apologized, we’ve made peace, and we have come out stronger. Every single time it has flipped their day (and often mine.) Teaching isn’t easy, it is worth it. Acting like the adult in hard situations always makes you feel like a pro when you’re a teacher.

To interact with a child on an even level, pull up a chair. They are sitting, you’re sitting. Sometimes a conversation or a little extra attention lets them know how important they are.
I teach quite a few introverts who don’t like extra attention, so while projects are going on, I’ll roll around and spend time with everyone. I never stop first at the introverted child’s desk who I know needs time. Some students who are tremendously introverted will blush if I start with them.
So, as kids work on their projects, I’ll roll my chair and spend time with each student. We’ll talk about what they’re doing. If a child is tired, ask if they feel ok. Sometimes a quick question will open up a conversation.

8. Compliment them to their parents or someone important to them.

Genuine compliments are my favorite type of thing to communicate to parents. As Joe Sanfellipo and Amy Fadeji said in 10 Awesome Ways to Build Parent Partnerships, the first contact with a parent should be positive. Then, after that we need positives to keep flowing. You can do that several ways:
Think about it.  When a child goes home, and someone says, “Mrs. Vicki says you are good at doing ___” or “Mr. Smith says you did a great job at ___ today.”  Your name has just been said in a positive way. That, my dear teacher friends, is a good thing.

9. Use Grace in your Discipline.

Monday morning I was furious. I have a special chair that Kip bought for me that I sit in at my desk. It is expensive because I was having knee problems and I needed one with the right ergonomics for me. (See 5 Great Ways to Make Your Classroom a Healthier, Happier Place.)
So, I have one big rule — no one sits in my chair. Ever. The kids all know it. Several weeks ago, my own son and another boy broke the rule. My husband had to come in and fix the chair. I reminded my classes just last week.
Someone let three boys into the Wonder Lab last Friday. They sat in my chair. When I came in Monday, it was messed up. I was furious. I found out who they were, and I admit, I was angry. I communicated but I did not discipline them. I, literally, sat on it for a day. Instead, I went back to each of them on Tuesday and said this,

“I am sorry I was so angry yesterday. Mr. Kip had to come in last night and fix the chair. I know when you sit in the chair, you don’t feel like you’re messing it up, but it does. So, I have a rule that no one sits in my chair. My husband bought me that chair two years a go for my birthday so I wouldn’t come home with my back and knees hurting. Now, whether you agree with it or not, do you understand the rule that no one sits in my chair?”

“Now, I was pondering what to do on this because you broke a rule in my class. My question is: Do you understand the rule or do I have to put you in break detention so you remember it?”
“Mrs. Vicki, I promise that I will not break the rule, and I understand it.” each boy said to a T.
“Well, here’s what I’m doing, then. I believe your word and that you’ll do as you say. If you don’t keep your word, you won’t just have one day, you’ll have three, but I don’t think it will come to that. Let’s move on with this understanding.”

We end with reinforcing the rule. Reinforcing that they are going to be men of their word and that I believe in them. I believe none of the three will break that rule again. You can call me naive but in 14 years of teaching, this discipline with grace always works. I’ve never had to go back and put them in detention for the three days.
Kids who are spoken to with respect like adults often act like functional adults. Also, note that I handled it privately and discussed it when I wasn’t furious. You will be respected when you behave respectably.
In the end, handling disciplinary issues with tact and wisdom improves things.
It also flips their day when you are one adult who believes in them and lets them work situations out like adults. Certainly there are times I might send a child to detention but I can count them on one hand for the past two years.

Kids notice when you go over and above. Here are just a few ways to be a little extra noticing:

Be a Human Being Not Just a Human Doing.

I could teach like Einstein and preach like Martin Luther King Jr. but it would mean nothing without love. Love stops what it is doing when there is crisis.
Love looks people in the eye. Love believes in people. Love knows that relationships trump everything. Love — LOVES PEOPLE. And in the end, flipping a kid is the same as flipping any person — showing love.
於 3月 15, 2016